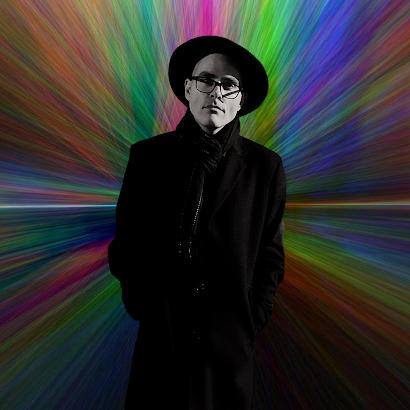 Almost every artist during the course of their career will want to develop their sound, often doing so gradually as they discover new ideas and find out what styles they do well. There are those artists though who, rather than making the gradual change, decide to take a big leap and totally change their sound in one step. It can often be a decision which polarises fans, and for some artists this is a headache that can lead to a regression, or as as it's often put 'going back to their roots'. Bob Dylan might have been the first to cause an existential crisis amongst his fans when when he plugged in his fender strat. In the context of the mid-60s it was a much grander change that it appears in hindsight, and there are more modern examples of bigger stylistic changes that have created uproar from fans.

Up until recently, Christopher Dallman had been a minimalist indie-folk singer songwriter, producing the kind of simple but intricate guitar-and-vocals music which can be quite hit or miss. Christopher was actually very good at it, from my listening he was excellent at hitting that sweet spot I have talked about previously. His recent singles though have been, on the surface, a massive departure as he has dropped his acoustic guitar and instead picked up a whole heap of synthesizers and drum machines to make a new electronic style of music for his forthcoming album 'Digital Blue'. It is a bold move, and it certainly feels different to his previous music, there is a distinct energy and atmosphere to his new single 'Lightspeed' that I have not heard from him before.

There are plenty of other artists who have changed their style that one can talk about; Joni Mitchell going jazz, The Bee-Gees going disco, Genesis going pop, Depeche Mode going less pop... there are loads of examples. One less famous example that I particularly remember is a UK band called The Horrors, who back on their early singles and first album, 2008s 'Strange House', played a pretty rough, albeit catchy, mash up of garage-rock and goth-punk. They were known as much for their edgy monochrome fashion as for their music. I loved them, but apart from the NME they were reviled by much of the music press. They were popular though, and they built up a mass of adoring fans. When their second album, 2009s 'Primary Colours', appeared it caused shock and incredulity amongst many of these fans. It was a major departure from their early work and saw the band produce a vibrant collection of electronica-fused shoegazing indie, with their bassist and keyboard player even swapping roles to enable this. The band didn't care about the reaction from fans and stuck to their guns with their new direction. It served them well, because they have since become one of the most critically acclaimed UK bands of the past decade, with three more award-winning records under their belt, and most people have forgotten their jagged goth-punk beginnings.

The reason I am talking about them in this review is because The Horrors are a brilliant example of how to change styles well. Their dedication to a new sound and an unwillingness to compromise their art are what made them successful at it. They also had the ability to use their knack for writing a quirky but catchy tune in their new sound too. 'Primary Colours' didn't just sound great but the songs themselves were addictive and still had enough of their peculiar gothic hooks to make it a great listen. Christopher Dallman is also someone who has been able to make this change successfully by using key elements from his previous sound in his new sonic craft. Within 'Lightspeed' there is still the same deeply intricate yet minimalist sense to his song-writing that he utilised before. The difference is that instead of plucked guitar arpeggios and softly strummed chords, there is punchy keyboard lines and smooth walls of electro-pop synths.

Christopher has also continued to use his voice in a similar fashion to his indie-folk material; he hasn't tried to go for some grandiose melancholy or a heavily layered and digitised version of his voice. Instead he has kept the same tenderness and tangible emotion which makes his earlier work so endearing. When he sings "you can raise me up / elevate me / and with just one word / devastate me" there is a gorgeous and effortless sincerity to his voice. He has used the beat of the song cleverly too - it's there to emphasise the tune not overpower it, and it gives a subtle vitality to the song that helps it flow immaculately.

Lyrically 'Lightspeed' is a rather beautiful description of the simplicity of being in the presence of someone you love, and the video features three different couples dancing through the city streets, walking through meadows of flowers and kissing in their room, interspersed with some blurred out night-time dash-cam shots and a solo dancer in their candlelit room. It could hardly be a better depiction of the song in visual form, feeling both intimate and touching in every moment, whilst bouncing between wide landscapes and cozy spaces. It's joyous without being overly-sentimental, and sweet without being too saccharine in flavour.

I am seriously impressed by Christopher's ability to change completely the sonic field and energy of his music whilst maintaining the same warm and delicate tone to his songs. 'Lightspeed' would be a great tune whether it was produced with one acoustic guitar or a mountain of Moogs and Korgs. What the electronic sound does show is that Christopher is a wonderful songwriter who can be just as profound whilst expanding his sonic palate. With his new album due out soon, this is the start of what is set to be a highly successful new direction

'Lightspeed' is released on 4th September, and Christopher Dallman's new album 'Digital Blue' will be out on 23rd September. You can find his music here.

August 26, 2020
Swedish musician Dan Wande has a career spanning over 40 years, writing music and playing in multiple rock and metal bands in his home country. Now, aged 57, he is venturing out as a solo artist and creating the best music of his career. His two solo releases so far, Wings and Way Back have had a brilliant response, racking up hundreds of thousands of Spotify streams. I spoke with Dan about his musical journey, his visions for the future, and what inspires him to keep his heavy metal flame alight. Click here to read my review of Dan Wande's latest EP Way Back Hi Dan, thanks so much for letting me interview you. I was really intrigued by you and your lengthy career. What can you tell me about your musical journey so far? Well I started playing guitar at the age of 13 in my room at my parents house, struggled with that for five years and then moved to a city called Haparanda, on the Sweden/Finland border, for college. One of my classmates happened to know some musicians in the town a
Post a Comment
Read more

Review: Leaving While You Stay by Greg Hoy & The Boys

August 18, 2020
In the video for this track, interspersed with colourful shots of the band performing, there is a character jiving and strutting around. He is in a suit, pointing fingers, tweeting and making private phone calls to the Ukrainian president (one can assume), all while wearing a clown/trump hybrid mask. Rarely has there been a more appropriate metaphor. The Trump administration has gone so far beyond ridiculous that is has pushed political failing in to new realms of horrific corruption, and it would be funny were it not for all the people suffering and dying because of it. That statistic that was revealed recently of how many lies he has told in office was staggering and yet somehow, after nearly four years of it, still quite believable. It was 20,000 by the way. Twenty. Thousand. That is more than 15 lies per day. How can you even comprehend having that much disregard for the American people? In 'Leaving While You Stay' Greg Hoy & The Boys have attempted to write their own
Post a Comment
Read more