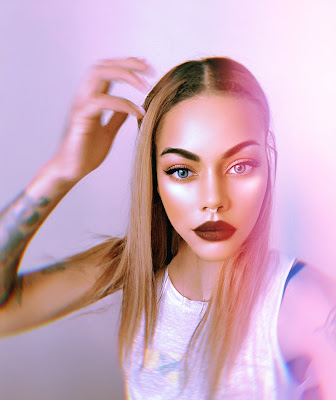 Although there sometimes remains an outsider view that metal is still a pretty stagnant and unsophisticated genre, there are actually a wealth of artists in the underground who are pushing the genre forward both musically and culturally. Lindsay O is a brilliant example of the dynamism of modern metal. The LA based vocalist and instrumentalist has been at the front of a number of boundary pushing projects within the broad scope of death metal, and has lent her talents to several different styles and sounds. Whether it's the dissonant tech-death of Coma Cluster Void, the slam death of Eyes Of Perdition, or the industrial experiments of Catenation, her combination of roaring low growls, epic high screams, compelling cleans and charismatic spoken words make everything she puts her voice to exciting.

With her new project NATALIA, Lindsay O has taken something of a different turn. Placing her focus into electronic sounds, NATALIA still has much of the intensity and energy of Lindsay O's other projects, but there is also a softer and more intimate side too. Her debut solo EP VANN is four tracks of intricately crafted electronica that brings to mind the minimalist trip-hop of Portishead, the weird pop of The Knife and the hyperbass of SOPHIE. For her latest single See 'Em Punk, Lindsay O has combined the sounds of VANN with some more of her metal influences, creating a hypnotic trip through waves of intense industrial and elevated electro.

To find out more about Lindsay O and her creative mind, I asked her some questions on her musical beginnings, her influences and what inspires her both in her metal projects and in NATALIA. 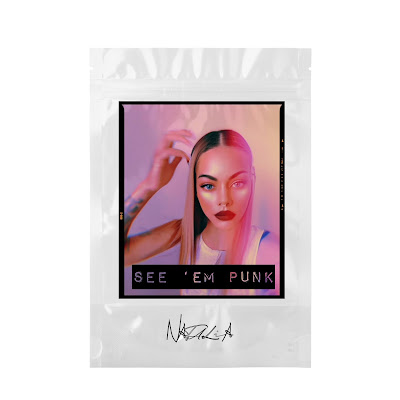 Tell us about how you started making music.

I have been in bands since I was pretty young; pretty much every project I’ve been involved with has been a collaborative effort song-writing wise, but over the years, I realized I had my own story to tell and started writing my own music as a solo artist within the last couple of years.

What was your first project?

My first project was called I, Matador - we were a bit progressive as a metal band, integrating a lot of different moods and genres into our sound, which I guess made us a bit of an anomaly in the metal world at that time. We had very dramatic moments, along with some traditional old-school death metal stuff going on. It was fun.

Who were your early inspirations?

In terms of metal, for sure unequivocally Crisis (NYC) was my earliest inspiration; I also discovered Cryptopsy around the same time in the Mike DiSalvo era - and who knew some twenty years later I’d be in a band with him through Coma Cluster Void?!

Both bands really changed my perception of what’s possible to do with music, metal or otherwise.

Other influences include Rollins Band and a lot of 80s hardcore; I loved the brute honesty of the music at that time. Nothing was hyperbolic; it was all sincere and messy.

What got you into extreme metal? Was there a particular band or artist that was your gateway?

I grew up in the 90s, so I was listening to grunge music often; I sort of naturally craved more guitars, more distortion, heavier things as I grew older. I think Soundgarden was a path, as was as Alice In Chains, to seeking the “riff.”

Tracing it all from there is a bit fuzzy, but honestly, I somehow landed on Gorguts, Cryptopsy, Crisis, Bolt Thrower, Autopsy, etc. Thankful every day I discovered music that helped me mentally escape from my surroundings. I found what I’d needed in this music.

I can’t overstate how important Crisis was to me growing up. “The Hollowing” is such a dark and intense album, exceptionally creative.

As a vocalist you perform both harsh vocals and clean singing. Did you start off doing just one or the other, or did you always want to be able to do both?

I think I’ve always been able to do both - besides heavy music, I’ve always had a strong appreciation for music of all genres, especially singer/songwriters and solo artists, trip hop - pretty much anything that’s honest.

I think clean singing is actually more challenging than doing “heavy” vocals - the skill and intricacy associated with “clean” singing requires a lot of practice and patience.

You've performed with a number of death metal orientated acts, but with NATALIA you're focussing more on electronic sounds. What made you make this artistic choice with the project?

Good question - I think there was a natural foray into electronic music. I’ve always loved electronic music - some dance, but mostly 90s trip hop and electronic music (Portishead, Massive Attack, etc.). Those sounds shaped my perception of what’s possible to do with music as much as metal did.

I also think that I can express some of the finer and more intimate experiences in life through electronic music than I can through heavier styles; there’s the innate intimacy that comes from soft cooing or clean singing, rather than a guttural style vocal. Musically, it’s also easier for me to write thematically and express a breadth of emotion this way.

You've just released the new track See 'Em Punk with Natalia, tell us about the track and what inspired it?

“See ‘Em Punk” is an unequivocal love song - I’ve never written a love song before, so I had to do it in a way that made sense to me; loud with an homage to grunge. I wanted to take some of what I’d done on my EP, VANN, and braid in my other visions of loud guitars and explosive moments with some sweetness mixed in.

Do you focus on specific topics with your lyrics or do you try to vary your themes?

I vary themes from project to project; with Eyes Of Perdition, one of the metal projects I am involved with, the themes are really centred on personal power - it’s very “in your face,” as it should be since we’re a dirty slam band.

In Coma Cluster Void we share in the responsibility of writing lyrics. For NATALIA, the lyrics are very personal; most are derived from poems I’ve written over the years come to life in the form of song. For Catenation, I wrote the lyrics to really capture the heaviness of the mood of that album. For my collaboration with the Argentinian band, MOSTRO on a song called “XAHPOC,” I took the reigns on the lyrics, but Lucas Wyssbrod set the mood with the intense soundscape. Lyrics pretty much vary depending on the project, and where I’m at in my life at the time. 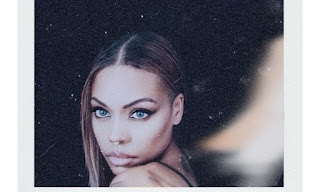 What's been the highest point in your career so far?

I think one thing I’m really stoked about is just having released the music for NATALIA - I’d been wanting to really carve out something unique for a while, so I’m just pleased I had the proverbial balls to put it out there.

Joining Coma Cluster Void was also a highpoint - working with this exceptional team of musicians has been quite an honour. I respect each of them immensely, and I am proud of all that we are doing.

Joining Eyes of Perdition has also been a highpoint; I love what we are creating and can’t wait for our EP to showcase what we’re all about.

The pandemic has had a huge impact on the music industry across the world, has it had a big affect for you?

Yeah, I think it forced a dramatic shift in how we as a collective industry interact with each other. It also took away, even if just for a short time, something I truly love - performing live. I miss being on stage, but I also miss the human interaction I have when going to see my friends play shows or when going to a festival. I miss forming new friendships on tour.

Things will return, I am sure, soon enough, but it puts it all in perspective - how precious this all is, how special it all is, and how we should never take these things for granted.

What are the future plans for your projects?

There’s a lot of new music on the horizon: Eyes of Perdition will be releasing our debut EP in this spring; Coma Cluster Void is actively recording our next full-length album. I will also be releasing a super secret collaboration with some friends in a band called POUND soon, and NATALIA will have a full-length album by year’s end.

July 05, 2021
There's a self-deprecating joke amongst fans of New York noise rock pioneers Swans that goes something along the lines of: 'What's your favourite Swans song?' 'The one with a single guitar chord repeated for ten minutes while someone screams "suicide" over the top' 'But wait... isn't that all of them?!'. Cue a chorus of laughing music nerds. Joking aside, there's something to be said for the mind-melting experimentalism of repetitive music, and while that Swans joke is a bit of an exaggeration, there are times when a simple hypnotic loop can offer something quite fascinating to listen to. In this regard, I wonder if that was the intention of Hollywood Video Game Kill-Bot on their latest single Shaker, or whether the track's trance-like effect is simply an incidental effect of it's composition? Hollywood Video Game Kill-Bot is a rather enigmatic artist, with little information available about them other than the name and location
Post a Comment
Read more